How can there be a pandemic without Pluto?

Normally I don’t write articles about mundane events, but the current SARS-CoV-2 pandemic has affected us all and I’ve seen many different explanations about astrological factors pointing at it with some astrologers arguing about the importance of Pluto, some even going as far as claiming it cannot be seen without taking Pluto into consideration. I have decided to share my thought on this, without using trans-saturnian planets and through a classical approach. As a location I’ve chosen Kuala Lumpur in Malaysia as that was the area of the eclipse’s peak. 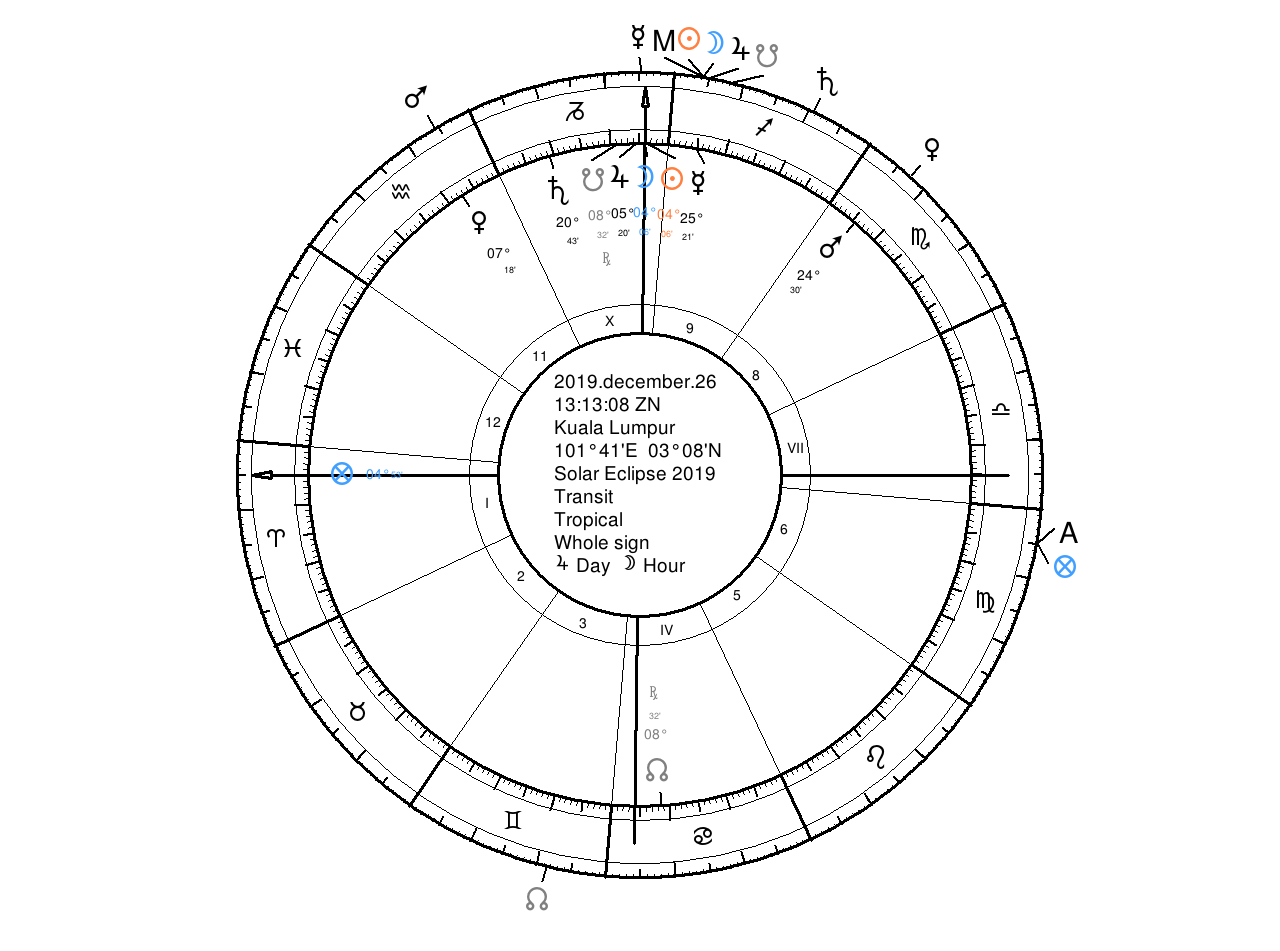 The Solar eclipse that took place on December 26th and had its path through Asia was a special one from observational perspective. Its corona was thicker due to the Moon being further from the Earth and a so-called ring of fire could be observed – a thick glowing ring. When I saw that, I wondered what is being symbolized by this. Since the eclipse was in Capricorn I thought that we’ll see some restriction of movement, possibly some borders closed and a strict control imposed. I never thought about a virus, much less of pandemic, but in retrospect the thicker corona / ring of fire speaks for itself and is a perfect symbolism of what is going on. When you are in a circle of fire there is no escape. It is also interesting that in Indian astrology the nodes of the Moon are connected to bacteria, viruses and poisons.

Jupiter was almost in the heart of the eclipse in a severe combustion, indicating a possible lack of wisdom and maybe even unethical actions from the part of authorities.

If we look at antiscia (mirror points across the solsticial axis) on the outside of the wheel, we can see that Mercury was conjunct the eclipse by its antiscion. Another interesting connection is between Mars and Venus, with Mars having the upper hand as he is dominating Venus by a wholesign square, being in the 10th sign from Venus, and to make it stronger, in his domicile. Since a malefic is dominating Venus we can call this a maltreatment which is a detrimental condition. As we can see, there was no noteworthy benefic influence.

This Solar eclipse was an extremely malefic one without a doubt.

The full Moon was in Cancer, the sign that symbolizes the chest in the human body.  The Moon has grown what was seeded at the December Solar eclipse and manifested it when her light was full, but dimmed in Cancer. Jupiter was still conjunct  the South Node and having benefics with the South Node is considered inauspicious in Hellenistic astrology as it takes away their beneficence. Jupiter here was fully employed to expand what was dictated by Saturn, the ruler of Capricorn. After the Lunar eclipse we saw the spreading of the virus to other countries and increasingly strong preventive measures.

By looking at antiscia we can’t go without noticing Mars touching Saturn through his antiscion, albeit not exactly to a degree. 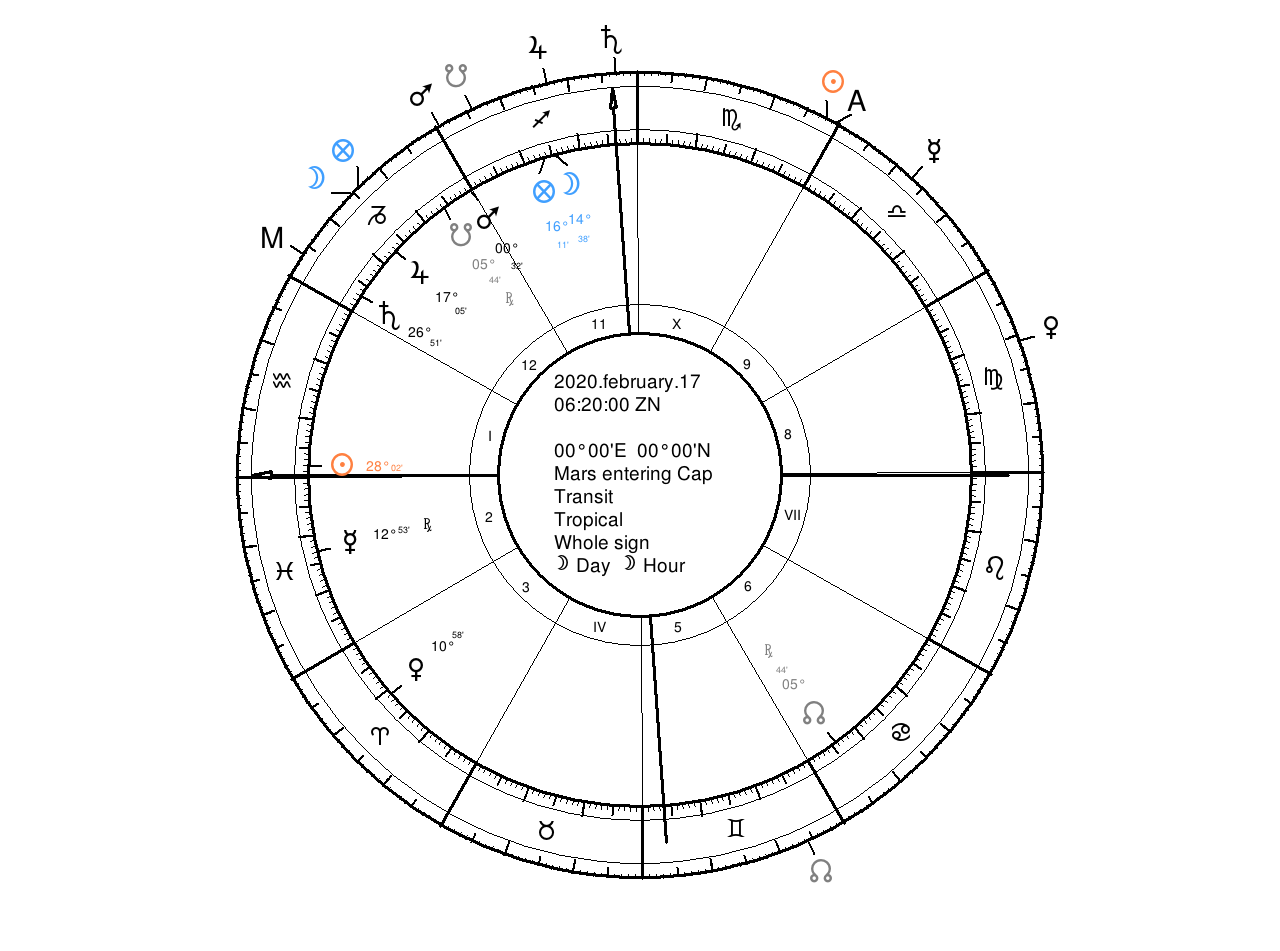 When the global spreading became a concern early in February, Jupiter started being besieged or enclosed by both malefics as Mars entered Capricorn on February 17th. Both, Saturn and Mars enjoy being in Capricorn as it facilitates their malefic nature. Mars gets cooled down and his energy gets structured and thus his cruel nature becomes very efficient, like a very disciplined and effective soldier who acts when necessary and then cools off as if nothing happened, being emotionally detached.  Saturn is running the show here, being the ruler of Capricorn and traditionally connected to plagues and diseases. We have seen manifestations of both, “the plague” and the police hours.

On the other hand, Jupiter is out of place in a cold, emotion-less, materialistic and rigid Capricorn. He cannot ignore his own expanding nature, but instead uses it to expand through the nature of Capricorn and what its ruler Saturn demands. In normal circumstances, provided Saturn is well placed, this can be good for setting up a kind of business structure, but in this case Jupiter was ordered what to do by both malefics, thus what we have now is a global pandemic, with most countries shut down and some even fully locked down.

The enclosure / maltreatment of Jupiter by malefics became more severe when Mars stepped on the other side of the South Node, getting closer to Jupiter. On the 4th of March the enclosure was at its worst, but after that, Venus has gained some potential to intervene by entering Taurus, although the effect of the eclipses will be felt until summer and the whole economical crisis might not be resolved until Jupiter exits Capricorn. 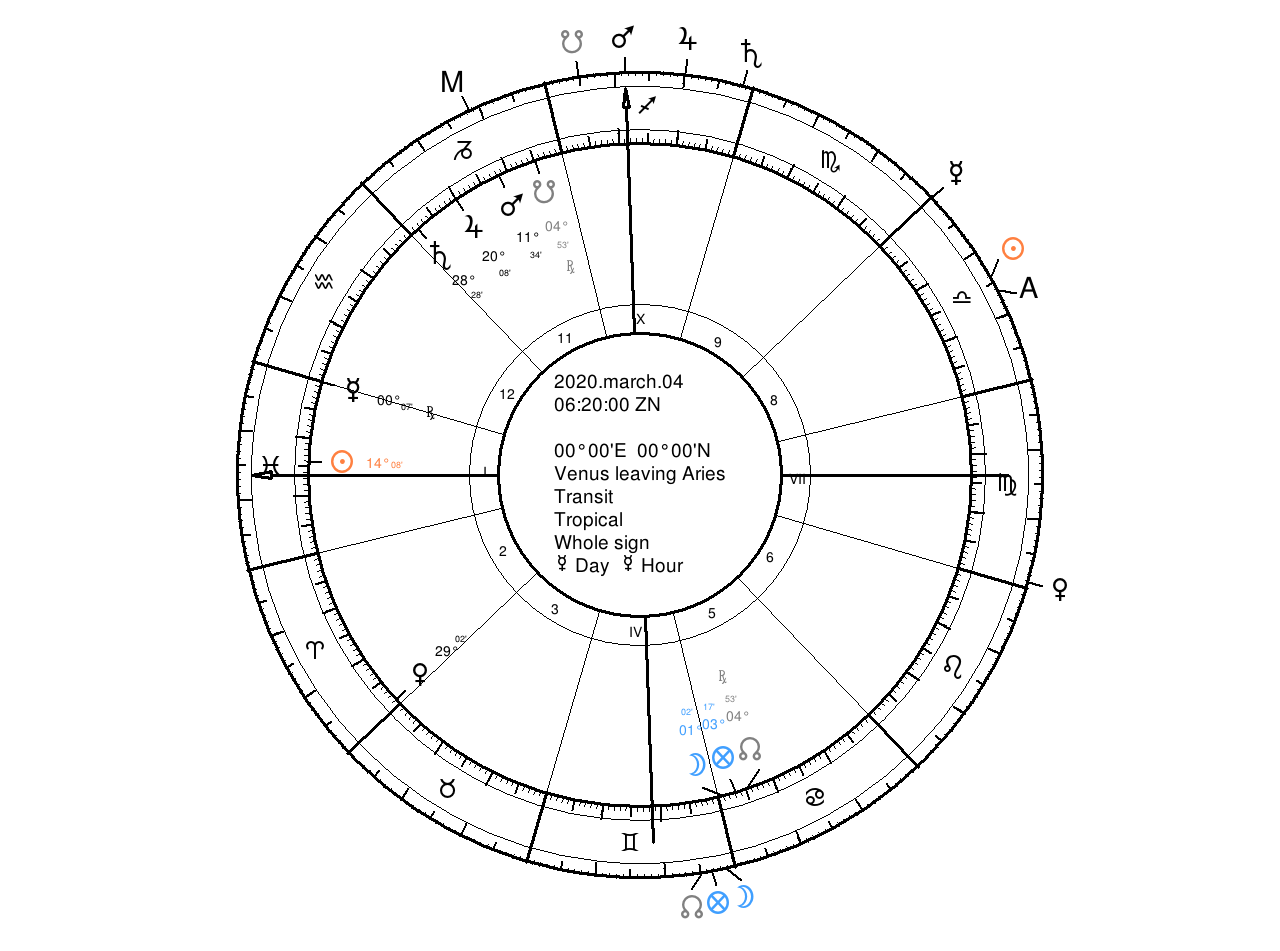 VENUS NOT AT HAND

With Jupiter converted into a temporary or accidental malefic, the only hope left was Venus. At the beginning of the global spreading of the virus before WHO declared a pandemic (March 11th) she was in Aries and maltreated by both Mars (her ruler) and Saturn. Both of them were in the 10th sign from Venus, thus her alleviation of the Capricornian harshness was not much possible. She was employed to serve their agenda and the only obvious manifestation of this I can think of is the hard work and brave actions of medical workers. There has been some of her more gentle influence present through a whole-sign trine from Taurus since March 5th, but it will not be until 27th of March when we can maybe expect at least some relief as Venus will apply a trine to Jupiter. It is also important to note that the enclosure of Jupiter has come to an end when Saturn has moved into Aquarius on March 22nd.

I hope I’ve managed to illustrate that we don’t necessarily need trans-saturnian planets in order to see the current state of the world through astrology.

Thank you for reading! Please, subscribe to my newsletter and get notified about future articles.