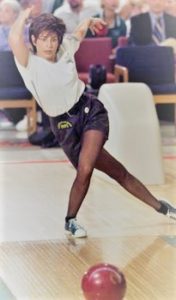 Laura, a lady in early thirties arrives in a red car, dressed in a red coat. Having Aries rising this doesn’t surprise me. Red is the color here. She quickly told me that she’s not entirely sure about her rising sign because she can’t really see Aries / Mars traits manifest in her. She’s interested in learning astrology. When I look at her chart with Aries rising I see Mars in Leo, the 5th whole sign house, conjunct the Sun and Mercury. I asked her if she’s doing any sports and if this involves children. She affirmed and told me she is a bowling coach and trains children with good success.  It’s a night chart, so Mars is a malefic that is in favor, albeit ruling the 8th, where Saturn, the out of sect malefic is placed with South Node in Scorpio. Aha! We have it!  This is the first clue to why her Martian potential is not manifested very much and also a clue to why she is afraid of having a child, which is her concern. Saturn with South Node in Scorpio 8th house indicates deep rooted fears that can even relate to sexuality. From there Saturn is aspecting the 5th house conjunction of Sun, Mercury and Mars through a whole sign square, but Mars, his ruler is dominating and receiving him through a right side square.  We have two malefics engaged in a fixed square, the most troublesome kind, engaging the 8th and 5th houses.  While Mars is the domicile ruler of Saturn, Saturn is the bound ruler of Mars, thus the two are partners in crime. While Mars is not as malefic as Saturn due to belonging to the night sect, nevertheless he rules the 8th house of fears, frustrations, idleness and death, so he is bringing maleficent influences, too and since this is a night chart he primarily rules Scorpio, the 8th house, Scorpio being his night domicile. While Laura is engaged training kids in bowling with her ruler Mars conjunct 3rd lord Mercury a really prominent manifestation of this Mars square Saturn is her fear of giving birth, fear that the child might die or that she might die. We stayed at the topic of children for quite a while as she’s also thinking that maybe she won’t be able to conceive. Based on what I’ve already analyzed there could be setbacks, definitely. Both malefics influencing the topic of children can also indicate an adopted child, but Jupiter is in opposition to this, in the 11th which is the house of the children of one’s spouse, being the 5th from the 7th. Interestingly enough, her partner brought in two children from his previous marriage. Jupiter is also exalted in the 5th harmonic chart, the panchamsha and well dignified in the 7th harmonic, the saptamsha which is usually considered in Indian astrology these days to be significant for the topic of children, but I argue that it’s more about the responsibility for our actions and children are the best example of this. The Lot of Children (the green heart) falls in Capricorn, so his ruler Saturn is in the unfavorable 8th and also falls in the bound of Mars, so it is tainted by malefic influence.  Both malefics keep influencing the topic of children. An adoption here is highly possible. 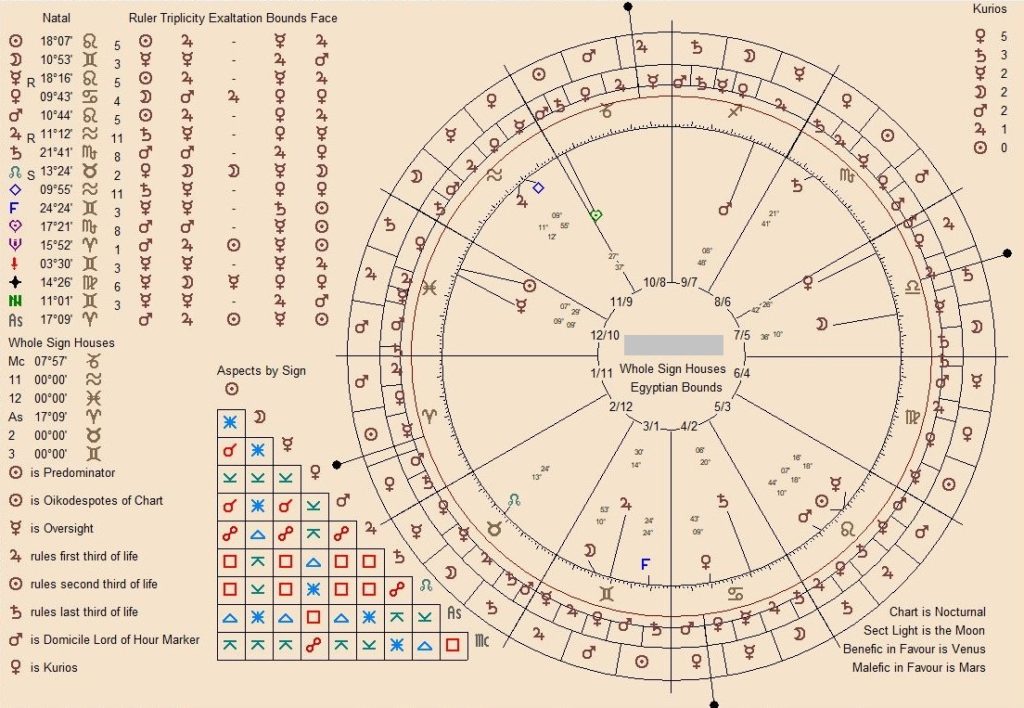 Then Laura wanted to know if her decision to study mediation was a good one. Her Venus, the diplomat and mediator is the only planet that is advancing towards an angle. I use Porphyry quadrant houses for assessing this.  She is three degrees away from IC, thus being very loud. She rules her 7th house of relationships and is in the 4th whole sign house, Cancer in her own bound and her own face, a benefic that is greatly in favor, since she belongs to the night sect.  She also gains directional strength in the 4th according to Indian astrology.  Her 12th part (the glyphs in the middle of the wheel) falls in the 7th, in her domicile Libra and again in her own bound. Venus is ruled by the Moon, the sect Light which sits in Gemini 3rd house where she has her joy. She is in the bound of Venus and conjoined the Lot of Fortune.  Jupiter, the counselor is also in the bound of Venus, in the 11th house, Aquarius. He is overcoming the Moon with a trine and is also conjunct the Lot of Spirit, which indicates that his significations are important for this woman’s self development.  Furthermore, his 12th part, dodecatemorion is conjoining the Moon. Being in an airy, social sign, in the house of his joy, the 11th, trine to the ascendant and square to the 2nd house of finances, counseling and the use of social sciences could be beneficial for her, albeit through some challenges and struggle and until she deals with her fears and self-imposed obstacles Jupiter won’t be able to deliver the goods.  He is ruled by and overcome by Saturn with a square. Saturn is also receiving him, but Saturn himself represents that which needs to be dealt with – fears. Jupiter in this chart can’t expand, being in Saturn’s sign and squared by Saturn and also out of sect. Venus and Jupiter are inconjunct, being in a 6/8 relationship, which can at best be considered as neutral . Venus is influencing Jupiter only through bound rulership and Jupiter is Venus’s exaltation ruler.  Due to angularity of Venus and connection of Venus to Jupiter through rulership with Jupiter in trine with the Moon and Lot of Fortune, I encourage her to stick to her study as it might bring desirable results and be very relevant for her at the end. Both Jupiter and Venus are in operative houses, Venus also ruling the 2nd and the 7th. The only challenge for her mediator role is that she needs to control her urge to have her say due to that triple conjunction in Leo.

This reading was a long one, almost three hours long, thus this diary is long. There was much to talk about as due to her Moon, Laura has many interests and keeps discovering new things. Then she asked if there are indications of spirituality present in her chart. Jupiter, the ruler of the 9th and 12th house co-present with the Lot of Spirit (blue diamond glyph) is one indicator, an important one. Jupiter’s 12th part co-present with the Moon, the sect Light and lord of the 4th is another one. Ascendant lord Mars has his 12th part in the 9th in Saggitarius in the bound of Jupiter.  It looks like the undertow of the chart is flowing that way with the addition of the 12th part of the Sun being in the 12th, Pisces.  She is very much into what today we’d call spiritual healing methods and therapeutic work. Mercury, the 6th lord in the 5th, with Mars and Sun, plus an important prominent Venus all attest to this. Since she’s also studying astrology a bit our conversation also went a bit technical and I expressed my joy of finding a great astrological software called Planetdance and her chart was the first one I read with this software. The name Planetdance is a bit on the cheesy side and might not give an accurate idea about the awesomeness of it. It is truly a remarkable piece of software which I wholeheartedly recommend to anyone studying Hellenistic astrology or even modern Western astrology.  It’s free and it’s wonderful! I’m so excited about it that I’ll probably write a review one day.  After some chat and some tea Laura dressed her red coat and drove away in her red car, embarking onto a mission of setting her fire free.

Thank you for reading! Please, subscribe and get notified about future articles.