A heart gone out of whack 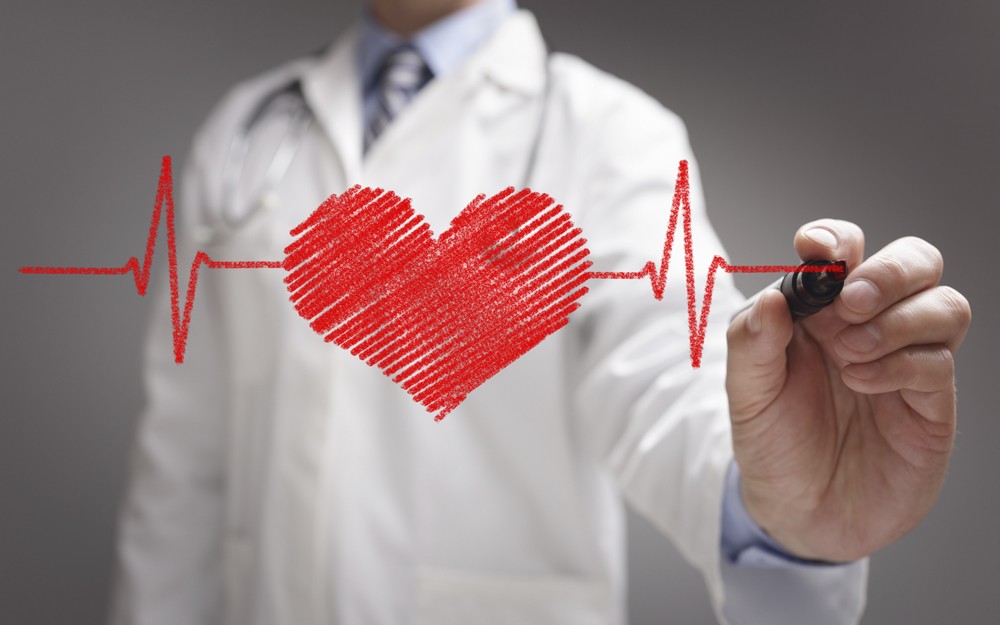 On Monday, 26th of March 2007 at around 8AM I finished my breakfast, got up from the table, went to pick something from the floor when it happened; severe pain as if someone would stab a knife into my chest, I could no longer breathe normally and could not straighten my body. When I tried to breathe and stand up the pain got worse and the stabbing got more intense. I decided to lay down and pray, because I was convinced that this was the end of my journey here. Screaming out of pain I could see the bottom of my chest pumping in an uncontrollable and wild rhythm, my vision started to get narrower and blurred and I could feel my life force already leaving my body. This was it. This was the end of me as Rok Koritnik. I called out to the Divinity in great distress and to my surprise a few moments later I was still here and my heart started to beat normally again. My wife took me to the doctor and the electrocardiogram has shown some anomaly and I got appointed to the hospital for an in-depth check. After a week of check-ups the conclusion was that it was not a true heart attack, but most probably my heart got out of whack due to a bubble of air that entered the heart.

Let’s analyze this event with my take on various Hellenistic techniques.

THE RADIX CHART with 12th parts around it: 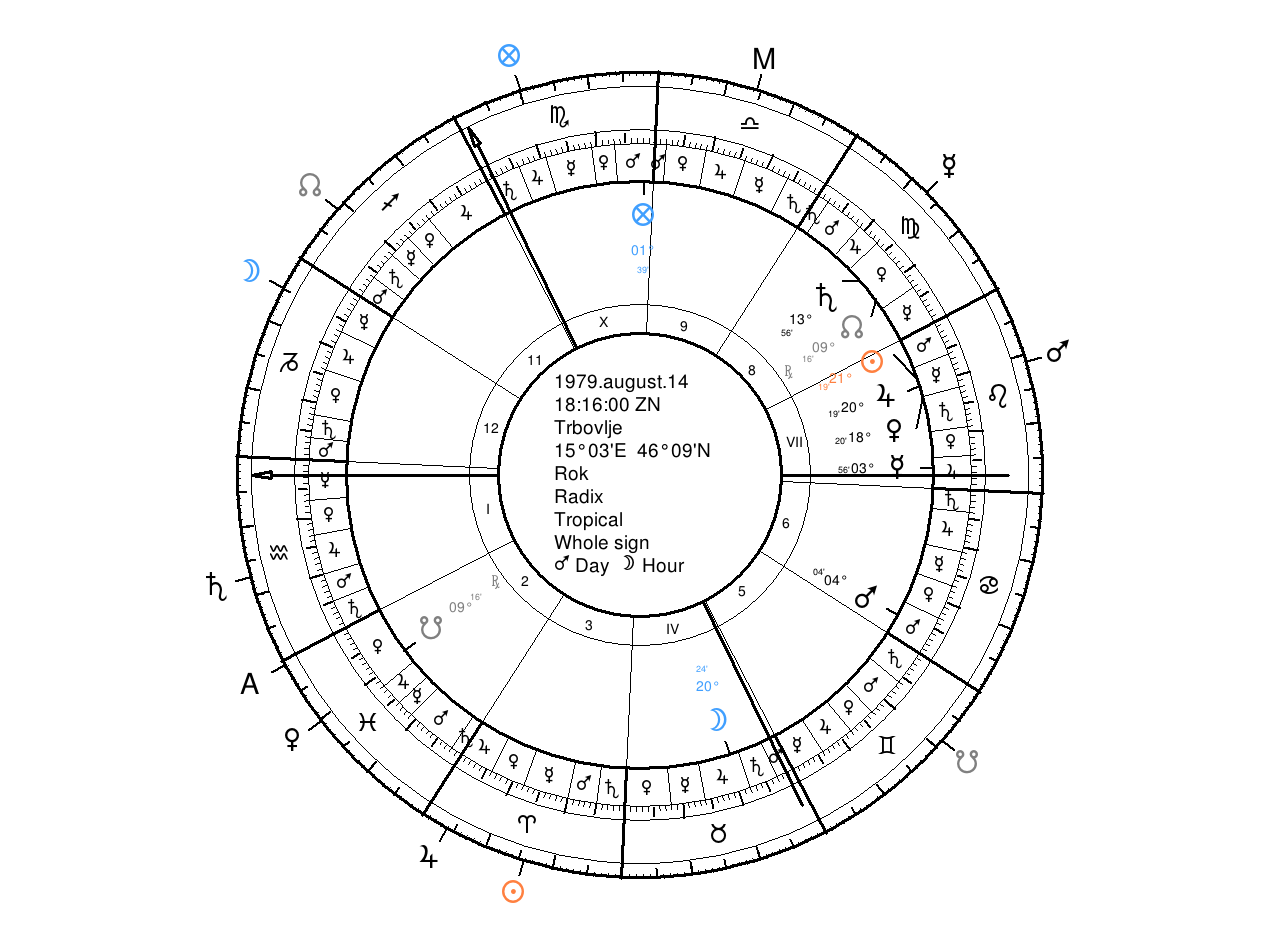 Picture no. 1: Radix chart with 12th parts around it

Saturn, the ascendant ruler is in the 8th house of death and troubles with the North Node, indicating possible sudden unpleasant events pertaining to the body.

The ruler of Fortune is Mars, the out of sect malefic who is debilitated in the 6th house of illnesses and accidents. Mars, thought by some rules the heart muscle and is also connected to stabbing and piercing, sharp pain. Cancer is associated with the chest, where the heart is.

The Sun (vital force) is conjoined Mercury, the 8th ruler, so difficulties related to life force are indicated.

Furthermore, Jupiter is the ruler of the Lot of Nemesis (which is in Sagittarius) is conjunct the Sun. Thus in the context of vitality issues, Jupiter is possibly a trouble bringer, albeit a milder one due to simultaneously ruling the 11th house.

It might be worthy of investigating the sign the ruler of Nemesis is in as the part of the body that will experience hardships and in this case Jupiter is in Leo which is heart and spine and I had issues with both.

The 12th part of Mars is on the radix Sun which is adding to the whole picture.

DIRECTIONS THROUGH THE BOUNDS (AND SIGNS): 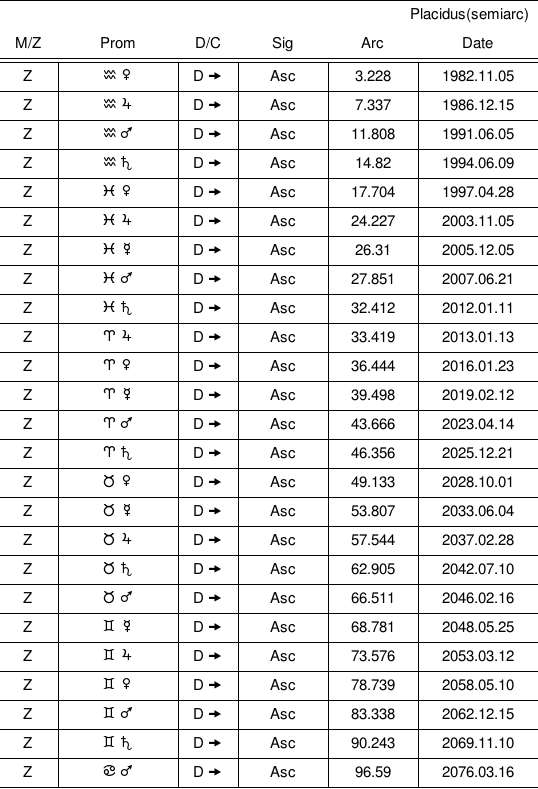 Both time lords are ruling some malefic factors, Mercury ruling the 8th and Jupiter ruling Nemesis, both being placed in Leo with the Sun who is well dignified in all respects. Sun’s dignity and strength prevented the life-force to be wasted.

At age 27 the ascendant profected to the 4th house, Taurus, transmitting to Venus who becomes the year ruler, which doesn’t necessarily indicate a stressful  event by itself. In fact, the year was pleasant overall.

Fortune, which we should look at for matters pertaining to the body profected to the 1st house, Aquarius, transmitting to Saturn, who is in the 8th.

The Sun profected to the 10th house, Scorpio, transmitting to Mars, who is in the 6th, debilitated.

Valens (book IV, 17) says that when the Sun transmits to Mars indicates a sickly and hazardous year. Apart from this unfortunate event, the year was a busy one and there was a lot of progress (profections to angles) and fortunate events, indicated by the profected ascendant, involving angular, exalted Moon and angular, albeit combust Venus without much essential dignity.

So far, the natal chart and profections  do hint at possible stressful events related to the body in this year.

SOLAR RETURN AS A STANDALONE CHART: 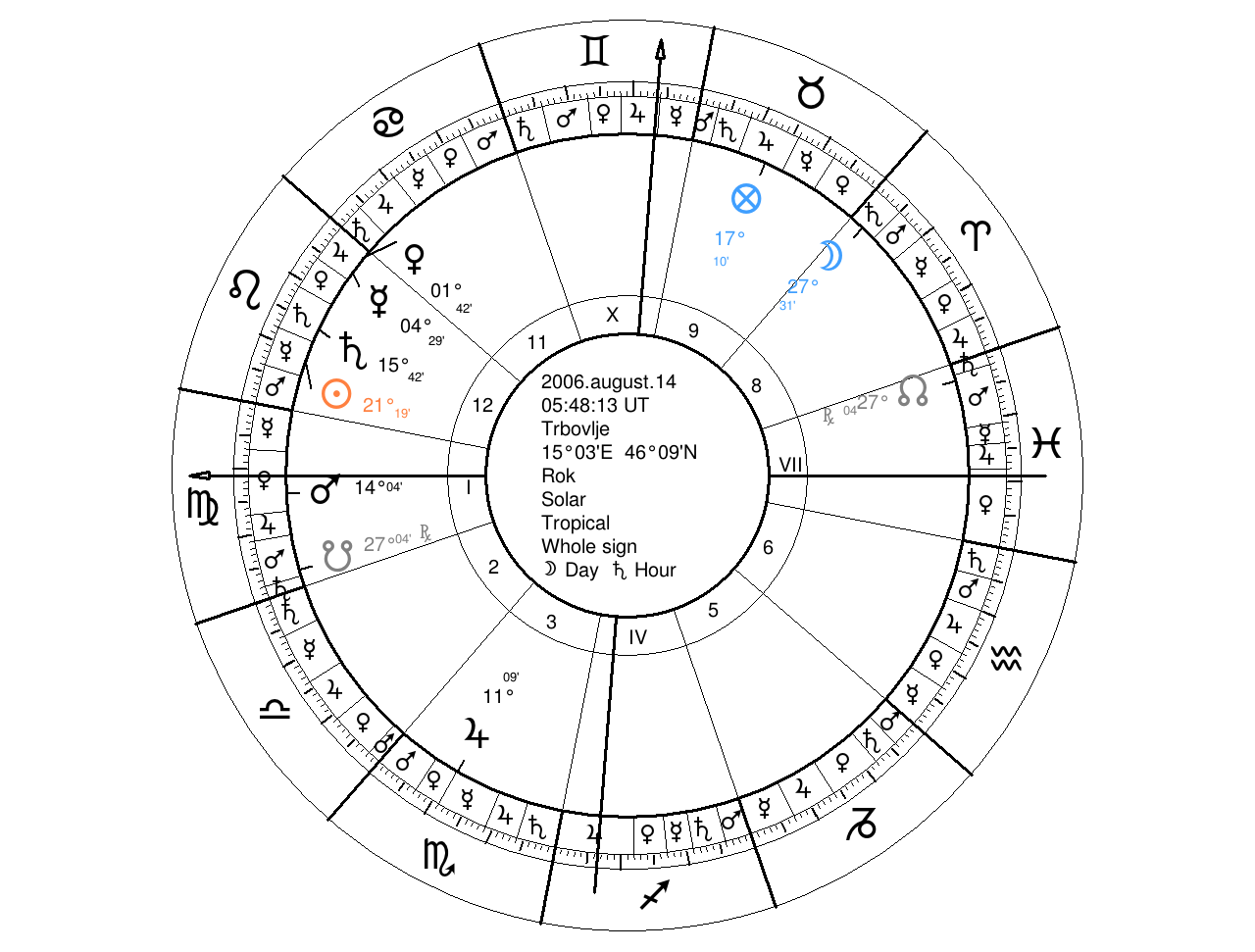 Out of sect Mars, the 8th ruler is very close to the ascendant, in own triplicity, conjoined the South Node who is in bounds of Mars and is weakening Mars, thus Mars can’t create as much harm.

These two factors alone already suggest that health will suffer in this year.

Venus, the year ruler and Fortune ruler is in the 12th.

Moon  is in the 8th in Aries (12th from Fortune), separating from the Sun.

Jupiter is sextile to Mars, received by Mars which is a possible mitigation of severity of the event, also indicating help from the spouse, the 7th.

Keep in mind that the planets in Solar Return chart no longer have their natal chart roles, thus Jupiter is no longer Nemesis ruler and Mercury is no longer the 8th ruler,but they receive new roles according to SR chart.

By performing profections in the SR chart, moving the ascendant one sign each month, in March we arrive at the 8th house. Now we already have plenty of malefic indicators.

TRANSITS TO THE RADIX CHART ON THE MOMENT OF SOLAR RETURN: 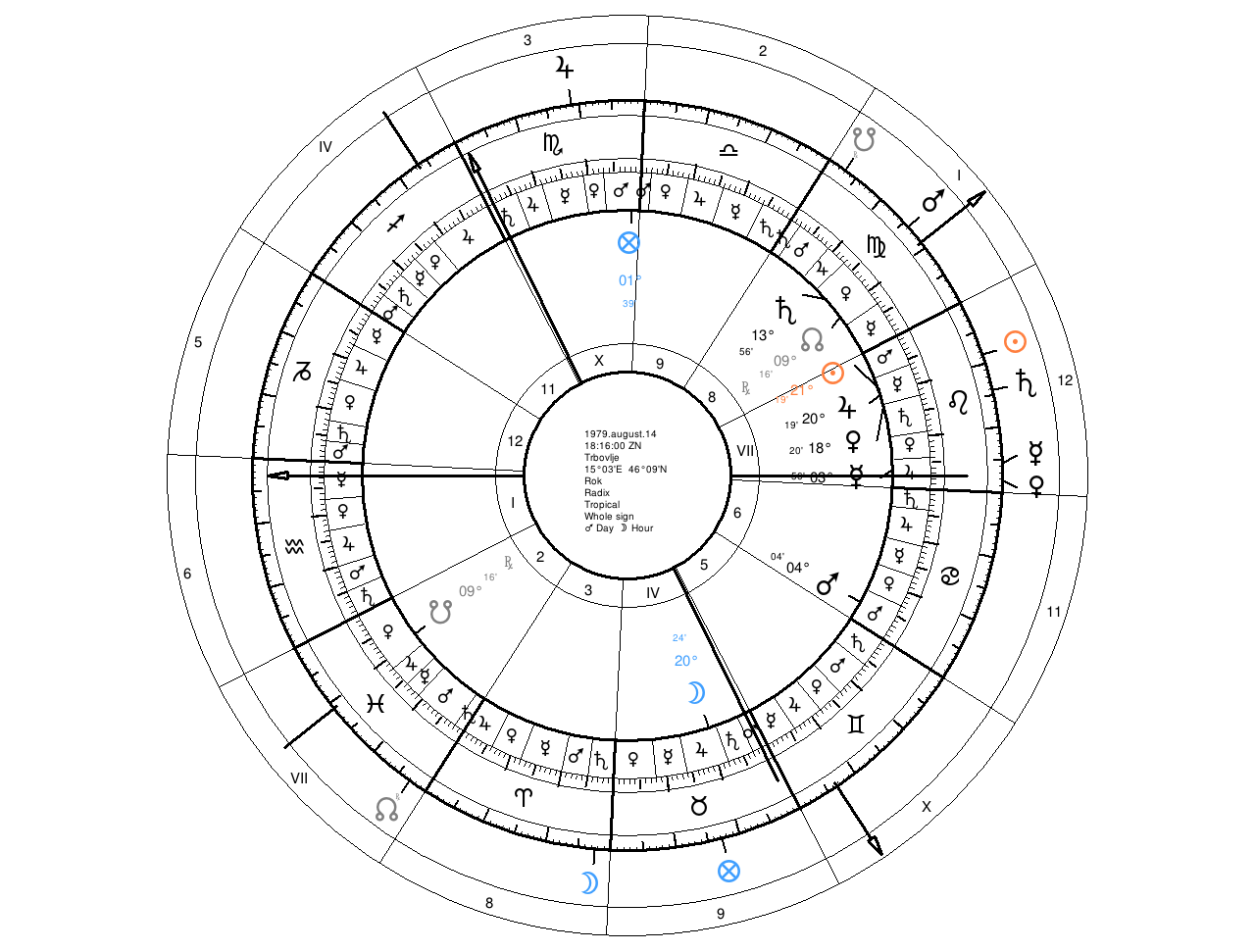 Picture no. 4: Transits on the moment of Solar return

Mercury, the time lord by directions had a near return.

Saturn arrived to the position of the year lord Venus in the sign of Leo which is the lower chest / Solar plexus area and is also associated with the heart region along with Cancer.

Mars, the profected ruler of the Sun arrived to the 8th house to the position of Saturn, the ascendant ruler who is with the North Node, amplified, indicating sudden traumatic events and possible near death experiences. 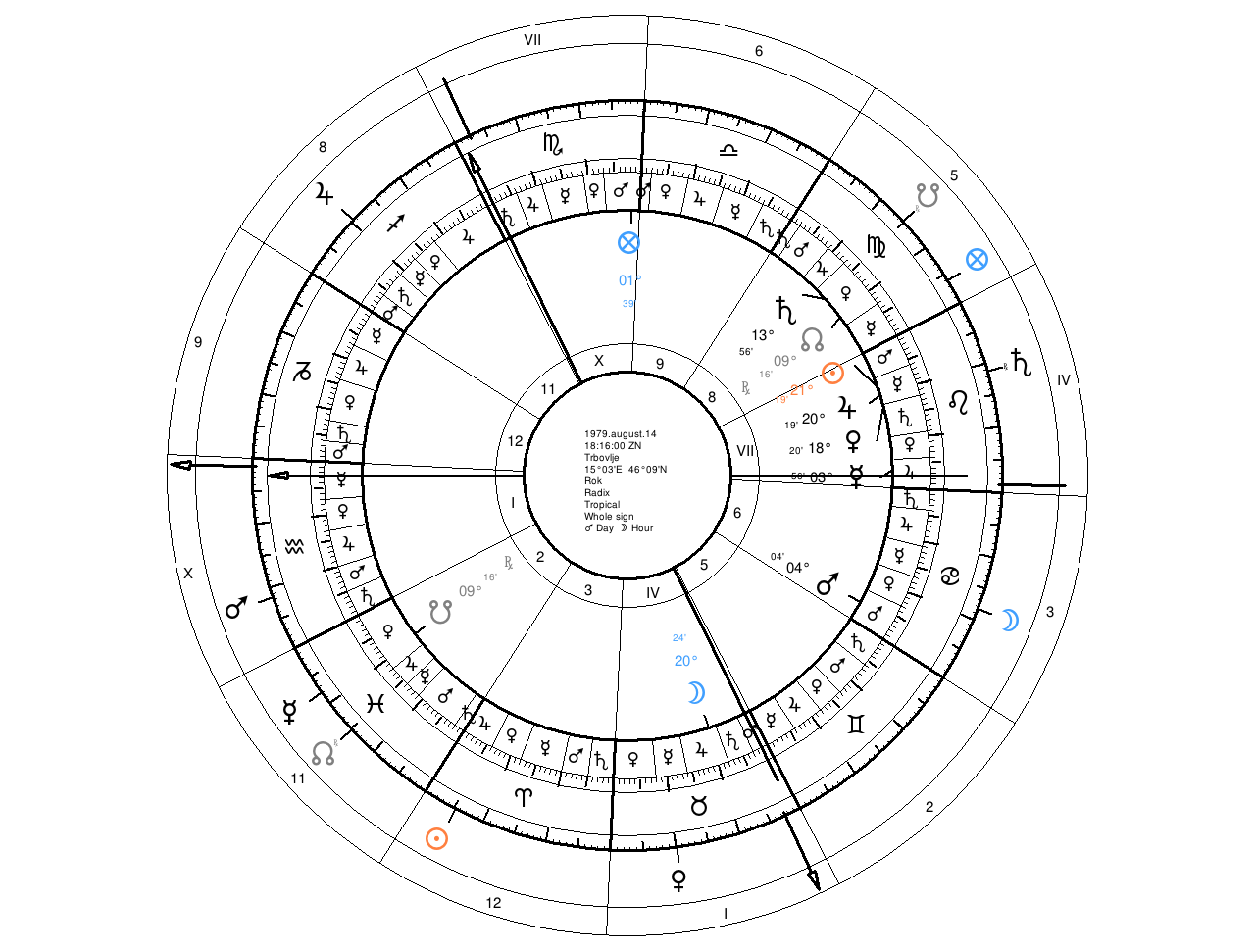 Picture no. 5: Transits on the day of the event

South Node was transiting over natal Saturn, thus Saturn was on the nodal-axis.

Moon was concluding the transit over radix Mars, waxing after the new Moon in Aries.

Jupiter was trine to the triple conjunction in Leo and also to the transiting Saturn and overcoming Mars with a sextile, aspecting from his own sign of Sagittarius, the 11th house of good spirit. This indicates an intervention and also a spiritual significance of the event.

Looking at this event from different angles with different timing techniques creates quite a bit of confluence, indicating a year where the body will experience a traumatic event. With Mars involved and afflictions in Leo there is a great chance of a heart related issue.
Due to the strong dignity of the Sun and a benefic, angular Venus ruling the year I got to stay here and I can type this today.

Thank you for reading! Please, subscribe to my newsletter and get notified of the future articles. Thank you!